A Bengaluru home that blends classic and contemporary design

The competition, which attracted an impressive 188 entries, asked architects to create a net zero design concept for a welcoming and inclusive pavilion of active sports and games on Clitterhouse Playing Fields, an open green space the size of 22 football pitches in North London. district of Barnet.

This will be at the heart of the vision for Brent Cross Town, a Â£ 7 billion city, a ‘park city’ developed by Argent Related and Barnet Council. The competition was particularly looking for participants from promising UK practices or teams and those who could demonstrate their commitment to Equality, Diversity and Inclusion (EDI).

The 10 shortlisted teams are:

The judges, which included the partner of Argent Related and the project manager for Clitterhouse Playing Fields Morwenna Hall as well as architects Sumita Singha from Ecologic and Teri Okoro from TOCA, were delighted with the huge response to the competition.

Hall said: â€œWe were impressed with the quality and diversity of the nominations, sparking much discussion as we deliberated on the 188 nominations.

â€œWe were delighted to see innovative thinking around our core priorities of sustainability and inclusiveness, which resulted in a long list of 10 diverse and creative ideas. We look forward to meeting the shortlisted teams and working with the four shortlisted teams on the next phase of the competition. ‘

Will Hurst, AJ editor and jury chairman, said: “Something about this competition captured the imagination of architects and receiving so many entries made it both a challenge and a pleasure to reduce. that number only 10.

“For the next step, the panel wishes to assess how these pavilion designs would work in practice at this specific site and how they meet the environmental and social ambitions set out in the brief.”

The 10 practices will present their ideas to the jury later this week. Four finalists will then be selected, thus ending the AJ’s involvement in the competition.

These four will receive a fee of Â£ 3,000 (plus VAT) to develop their designs. The winning team will be chosen by Argent Related and Barnet Council at the start of the new year.

A collective of architects, curators and writers interested in “exploring ideas about contemporary urban space through the prism of identity and race”

The concept of Afterparti is a trio of pavilions for a clubhouse, cafe and flexible use. The design is inspired by the theme of clay – in response to the derivation of the site’s name from clite, which means clay – using a base of earth reclaimed from the site as infill in combination with a wooden structure. The three pavilions will have a frieze of clay tiles with patterns developed in collaboration with the local population. In this way, the models will be meaningful for the ethnically diverse borough, where BAME groups represent 65% of the population. 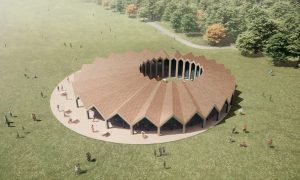 A north London firm founded in 2012 by Katerina Dionysopoulou and Billy Mavropoulos, who teach at the Bartlett School of Architecture

Bureau de Change was inspired by the history of the neighboring Clitterhouse farm, and in particular the typologies of gable roof and courtyard forms. Its entrance reinterprets them in a cylindrical shape around a courtyard, with housing divided into highly visible public spaces and more private spaces for changing rooms. The distinctive roof landscape is covered with recycled plastic tiles and sails to provide shade for the faÃ§ade and the perimeter walkway.

A North London practice led by DaeWha Kang, co-founder of Climate Change All Change, an initiative that brings together schoolchildren and designers to co-design solutions to the climate crisis

The concept of DaeWha Kang Design has a tri-radial plan of separate and interconnected spaces for coffee, locker rooms and flexible use. The entrances to these are located at each of the three gables. The pavilion’s green roofs rest on a wooden frame that seems to float above curved adobe walls. The building is designed as naturally ventilated and heated using a geothermal heat pump. The pavilion has terraced landscaping to the west and south, and lots to the east.

Based in Waterloo, London, the firm was founded in 2015 by George King, tutor at the University of Greenwich and former senior architect at Zaha Hadid Architects.

The concept of George King Architects was inspired by the shape of the park’s traditional bandstand. The design is conceived as four circular shapes joined together, incorporating exterior deck areas and courtyard gardens. The structure is mainly in CLT, with areas requiring thermal control, such as the cafÃ© and sports facilities, formed of adobe walls with cork insulation. The rubble from the site will be used to form the foundations of the gabion cages. 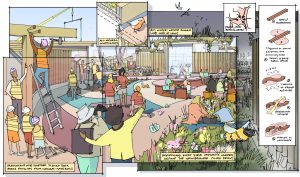 Nooma Studio describes its Side by side concept as “a self-built natural sports pavilion for Brentonians that promotes conviviality, biodiversity and human connection through play”. Built in wood and adobe frames, the facilities are housed in two winding volumes to frame activities such as a community garden, a performance space and an adult play area. With its tactile surfaces, rounded edges and cut-out shapes, the pavilion is designed as a fun experience for children and adults. 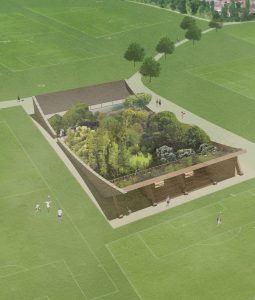 Founded in 2015 and based in Vauxhall, South London, the firm’s work combines architecture, furniture and landscape

Gone Stadium for nature concept closes a wild garden to promote biodiversity. Internal accommodation is housed in a block to the north, while to the south, stepped observation decks look out over the grounds in a reversal of a stadium’s normal interior orientation. The walls of the garden are made of adobe from the site, with a cross-laminated timber pavilion roof structure on stone foundations.

A north London firm founded in 2011 by Maria Kramer with experience in community projects. If successful, it would be a collaboration with a multidisciplinary LiveDesignPractice team

Room 102 Park center The proposal organizes the accommodation around an open community courtyard with reference to the neighboring Clitterhouse farm. The reception is central to the design with a cafe to the southwest and sports and support areas to the east. The pavilion’s wooden structure would be covered with a variety of cladding materials to reflect the demographic diversity of the area, including individual clay tiles developed with the local community in reference to the site’s association with the clay. . 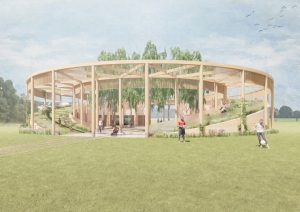 Founded in 2018 by Stefan Shaw, previously associate architect at Studio Egret West, and based in Peckham in South London

Stefan Shaw Studio offers a pavilion formed by two curved accommodation wings arranged around a common area, with a clear line of sight in the middle to the park beyond. The main building material is rammed earth combined with a timber frame of locally sourced English oak. A ramp garden covers the roof, offering views of the park and increased biodiversity. 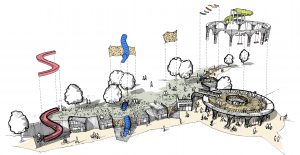 This joint team is formed by Studio Becoming – led by Rory Harmer, formerly of Tate Harmer – and Studio 8Fold, led by Alexander Frehse and Aleksandar Stojakovic, the first firm to emerge from the London School of Architecture.

Studio 8Fold & Studio Becoming Clay pavilion is centered on play, well-being and inclusion and is conceived as a â€œforce for social goodâ€. The design extends the landscape over the pavilion to form a rooftop wildflower meadow and picnic areas. This is connected by a footbridge to a bandstand, created with a structure adapted to insects to improve biodiversity, and topped by an observation platform. In addition to changing rooms and a cafÃ©, the pavilion features a climbing wall, climbing tunnel, slides and musical swings. 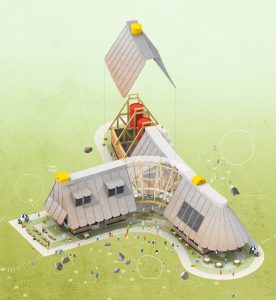 Established in 2019, Urban Radicals designed the Cyprus Pavilion at 17e Architecture Biennale in Venice 2021. Fisher Cheng (created in 2018) describes himself as practicing â€œcollaborative architecture with a socially motivated agendaâ€. Both are part of the Architecture Foundation’s residency program for emerging architectural talents.

Urban Radicals and Fisher Cheng offer The plunging pavilion. This combines three volumes – for coffee, hospitality / flexible use and changing rooms – converging into a central covered space for public gatherings. The structure is a wooden frame filled with straw bales and topped with a distinctive sloping roof clad in recycled aluminum. Rainwater is collected for gray water in the pavilion and the roof also houses huts for bees and bats.

Previous 50+ tennis group shares a love for the game and camaraderie | Way of life
Next guaranteed in full assertion of funding funds, realistically, candidates understand recommended Welcome to Take 60, quick one-minute stories about new faces in our industry who could …