It’s a pleasure to report that a large audience attended and passed COVID inspections for the return of the San Francisco Ballet to the 3000-seat Opera House, and that the performance was one of the best of my 30 years of ballet. The dancers were eager to get back together, it could be felt, it was visible.

A thunderous applause greeted Helgi Tomasson, Artistic Director, as soon as he stepped out, microphone in hand, to say, â€œWe’re back! With more emotion in his voice (he’s notoriously reserved) than anyone in the audience could remember hearing before.

And they were ready. Nutcracker was thrown into custody, with lead dancers and soloists even in minor roles – and by children, acting was on par with dancing, especially when the role required both: the rag doll ( Lonnie Weeks) was sagging like boneless, soft as cotton padding, even as it slipped through the slits, bounced in the wheels, spun and collapsed again.

Even the kids, especially our heroine (Abby Cannon), knew how to look like someone who belonged to that Christmas party at a house in the new Marina neighborhood (San Francisco just after the earthquake). They did their quadrilles and marches very well, but they also responded with real pleasure to Clara’s godfather, Drosselmeier (Tiit Helimets, remarkable in this key role), who intrigues them with magic tricks and brings the Heist. Nut he gives Clara, which makes her brother (Kai Hannigan), mad with jealousy, fights her for it: he grabs her and breaks him.

This scene was under-rehearsed for years, and everywhere your eye landed, someone was “talking” to someone who wasn’t really “listening”. With all the prep time they had, everything was cleaned up: suddenly the pictures were clear, engaging, and brought to many of us memories of our own holiday season when we were young, which corresponded to the nostalgia for the music of Tchaikovsky (which biographers attest, he writes in a fit of homesickness which keeps him on the verge of tears).

Helimets, who is normally portrayed as the prince, brings to the role the glamor and relaxed sophistication of a lead dancer; he’s a cool uncle, a DILF, Mr Fabulous. Tomasson stole the idea from Mark Morris in 1991 Hard nut, who updated Nutcracker in a sharp fashion and was shown by Cal Performances in Berkeley a few times in the 1990s.

Helimets’ spell can ignite the imaginations – of children and the public – and the spooky scene of Clara’s post-party dream that follows like night to day. All that testosterone that made her monkey brother become disrupts her dreams and suddenly she starts to shrink, like Alice in Wonderland – or the furniture grows, the tree grows (fantastic music for that, well done San Francisco Ballet Orchestra!), the Nutcracker (sublime Joseph Walsh) becomes on a human scale and comes to his aid when huge mice come out of the woodwork.

Tin soldiers come out of the waterfront, a rat king (Alexander Reneff-Olson) comes out of the blower box, battle ensues (and Tchaikovsky brings in a cannon). As the Rat King is about to kill the Nutcracker, Clara bravely feigns, distracts him, and the Nutcracker runs through him.

And then it’s forward! through a blizzard: 600 pounds of white snow fall from the sky, blown by wind machines in a swirling dance up to the top like the Snow King and Queen (Yuan Yuan Tan, senior ballerina, our biggest star, whose the name is a household word in his native China, ably accompanied by Henry Sidford) dances among swirling and waltzing snowflakes, lowering the curtain.

The presence of a gay uncle completely changed the way homosexuals felt about history. It was no longer, for me and for many of us, a gift to homosexuals that gave us a place in the family was no longer Nutcracker an oppressive source of Christmas anxiety. Maybe the next production will incorporate our feelings about gender and ethnic stereotypes, especially the painful echoes of white supremacy that linger in this production despite the presence of people of color on the show.

Plum role
Which brings us to our Sugar Plum Fairy, danced with wonderful ease by our new black ballerina, Nikisha Fogo. The biggest news of the opening night was her debut on the stage at the Opera, and her entry at the start of the second act – our first chance to see her live – was greeted with huge applause, which swelled all over the house while she pissed off. look after her little angels (tiny dancers, wings and wigs and impeccably rehearsed), and greet Clara and the Nutcracker Prince (Walsh) and offer a feast, with dance, in her honor. With two dancers for parents (Swedish mother, Jamaican father), she grew up dancing; his first love was hip hop.

Ms. Fogo understood everything. Long, powerful legs that can move with clarity or voluptuousness, with great freedom in the upper body that makes her seem to float naturally to the music. And she can act. Indeed, as she “listened” to Walsh “recount” how they had come here, the dangers they had gone through, Clara’s bravery in saving him from certain death, as Fogo understood it, she seemed to be going through. all the hopes and all the fears with them. , without losing any of his majesty.

And then they danced; brilliant entertainment after another, some with children, and a mind-blowing Russian trepak for three swirling and stomping cossacks which has been preserved from the old productions (Anatole Vilzak, who came from Russia after the Revolution and ended his days here) and made always fall housing it.

Fogo’s dramatic power has never been greater than when she crowned Clara with a tiara and magically transformed her into an adult dancer in pointe shoes (the glorious Frances Chung, who floats while spinning), as the whole troupe gathered backstage to watch her dance with her Nutcracker Prince.
The show runs until December 30. www.sfballet.org 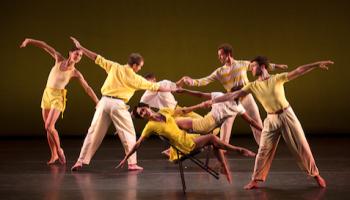 Morris? Yes!
Across the Bay, Mark Morris is performing this week with his dance group (in a singing role) at Zellerbach Hall in Berkeley. They dance a mixed program of new and old works.

Mark Morris is the most musical choreographer of our time; so daring, and so American in his daring, that when he was young he could hold a house of 2000 spellbound as he watched a toy truck drive through a dark stage to the sound of a country trucking song. He made her dance. And he followed that up by dancing himself, long, twisting curls, loosely draped in a dressing gown, Isadora Duncan style in a sad country swept by George Jones that has to be one of the greatest things. that I have never seen

He is the heir to the hippies; his dances are journeys. It’s easy to imagine him listening to Monteverdi in his headphones, imagining dances a la Looney Tunes. He actually set up a Handel oratorio – the closest model is Disney’s. Fancy. Twenty years ago he was working from recordings but he is so good at it now he has opera companies come to him and he actually ran the Ojai music festival.

The new work “Water” is a small piece on the very famous Water music, reduced to a chamber ensemble (played live). He’s great with Handel. I can not wait. Two other short works, Jenn and Spencer engage in a war between a piano and a violin of Henry Cowell, the gay composer who had to endure prison in San Quentin for his homosexuality (he taught music to his fellow inmates).

The latest on the show is his grand ballet â€œVâ€, put on a Robert Schumann quintet. It’s been years since I’ve last seen it: the afterimage that remains is a macabre, somber but almost funny funeral march, with the dancers entering the stage like grasshoppers or grasshoppers, in a sort of way. bear crawl. But the impact of what they did so clearly was out of all proportion to the means they used: my imagination was on fire. It may not evoke the same emotions this time; it’s always a risk. Still, I can’t wait to see it.
https://calperformances.org